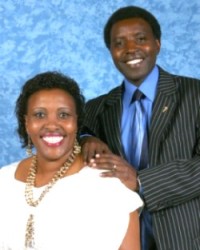 Pastor Paul Mungai Macharia has worked with the Department of World Missions for a number of years while attending North Park Theological Seminary and has travelled all over the United States and Canada to talk about World Missions and what God is doing in Kenya in particular. For some time while living in Kenya, Paul had a burden on his heart to plant churches but looked in many places for the kind of church denomination and structure that would suit his Kenyan culture and his own beliefs about God and the church. When Paul was invited to attend North Park he finally felt as if he had found the answer and the answer was the Covenant Denomination.

Paul is currently attending North Park Theological Seminary in Chicago and will seek ordination with the Covenant Church after graduation. Paul has worked tirelessly to establish the Evangelical Covenant Church of Kenya and has a tremendous vision and burden for the churches in Kenya. Paul is currently on the pastoral staff of Christ Covenant Church in Florissant, Missouri but continues to travel as a spokesperson for the work in Kenya and for the Department of World Missions. Please pray along with Paul that the vision that God gave him will be fulfilled as God leads.

THE JOURNEY
I was born in small village some 40 KM from Nairobi. My Parents moved from this village to settle in a semi desert area of Muranga, a land between two
mountains and a river in the middle. As my family continued to grow(6 brothers and 4 sisters), my parents decided to move yet to another far land, about 900 miles north of Nairobi, a place called Mpeketoni. This was a new founded land with no inhabitants in it. We were the first people to settle there, since the natives who are Muslims live in Villages with less interest in farming.

THE SETTLEMENT
We(Family) settled here in 1976. There were no Shops, Schools, Health clinics, not to mention,clean water or Electricity. Some how the school was
started under a makeshift and people started digging the wells for water. I used to walk about 18 Km to get to school at 7.30 A.M. In 1978, there was a prolonged drought which resorted to many death and sickness. Monkeys and Elephant meat was the food in many family homes. Snake bites,Lion attack, and buffalos was not a new thing. People were used to them since they lived among them.

FAITH & HOPE
Through all these difficulties, God was with us. My parents are both strong Christians and have taught us to depend on God in everything. Although I knew who my (Parents) believed, I trusted very much in them and not in God. I came to realize this in 1984 when I went to high School. I listened to the preacher and decided to accept Jesus as my personal saviour and Lord. I made a commitment to God that, through His help and guidance I will follow Him and serve Him. I asked God to help me and give me strength and wisdom to His people. I vowed to help and work with people of Mpeketoni to develop and establish Schools and Clinics. I believed in God’s providence, since by this time I had not even graduated from High School.

God provided!!. I went to Theological College both in Kenya and Zambia, and later in 1992 came for further studies in U.S.A. It was while I was in States that realized that, God was using this affluent country as a mirror to reflect back to my home area where some people slept hungry and with no clean water and good health services. 1993 I asked a group of people to join me and help my village, they agreed and hence started sending food and groups of Americans to go and help. This was God working!!.In 1998, a group of People from Christ Covenant Church-St.Louis accompanied me to my Village and distributed food and vitamins in Homes. Later, the Department of Covenant World Mission visited Kenya with me and helped me start a School with good running clean water and school meals program. I am looking at future with great hope and confidence, since our God,never fails.

TODAY & FUTURE
God is faithful to those who trust in Him. God has continued to guide me. After marrying my wife, Eunice in 1995, she has become one of the most helpful person in realization of my Mission and Vission.God has blessed us with three energetic Children, Paul Jr, Faith, and Victor. I am a Pastor at Christ Covenant Church in St. Louis Missouri in U.S.A. My wife is working with Bank of America. All of our focus is doing God’s will while partnering with other Christians in serving God and His People.

"Each one must give as he has decided in his heart, not reluctantly or under compulsion, for God loves a cheerful giver." 2 Corinthians 9:7

You can live a stress free life if you will only just pray because when you pray, you are turning the situation over to God. You're taking the situation out of your hands, and putting it in His hands. You're releasing it to God. Fill out an online prayer request form and submit it online.